THE NEW BREED OF AIRPORT TERMINAL – IT’S AN EXPERIENCE

19 July 2007 (JetQuay) – SINGAPORE – Airport terminals are evolving as evidenced by a growing trend for luxury terminals, minus the herding that is characteristic of check-in for airlines. The new style of travel creates an ambience that echoes the days of the Orient Express. The affordable rates of these terminals mean that you will not be relegated to the seated class while the rich have the sleepers - on the ground at least. In order to bring you that experience across the region, competitive Asian civil aviation bodies are cramming to emulate the success of the one-of-a-kind JetQuay CIP Terminal at Singapore’s Changi International Airport.

If you are one of those people who arrive at the airport forty five minutes before your flight leaves so that you can rush through the experience and straight on to the flight, your life is about to change. You probably dash through the airports because you are over the crowds, over the queues and over the cardboard taste of the beautifully presented food buffets while, after you finally manage to get on board and crack open that mini bar bottle of wine or beer to forget your surroundings. But discerning travellers are discovering an experience beyond Terminal 1 and Terminal 2 at Singapore’s award winning airport: the attentive and subtle service worthy of a five star hotel. 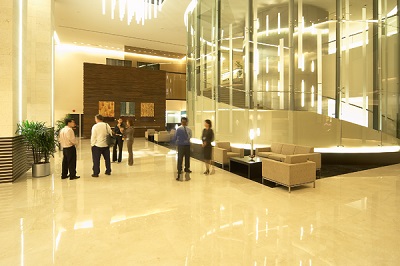 You never have to wait. The terminal is designed to be spacious and for all facilities to be constantly available. Food and beverages are served to you in a glass (not a mini bar bottle) and on a plate (the way you would at home). You can request a made-to-order meal. You won’t constantly bump into other passengers, there are no queues and you won’t need to push past anyone or find a help desk to find your airlines’ lounge.

A utilitarian of a building with meeting rooms for delegations, the standalone terminal that is now the CIP Terminal, once hosted Singapore’s VIPs, dignitaries and visiting heads of state. However when the new government VIP terminal was finished, in six short months, the old building was gutted and erected in its place a warm, sleek and well-appointed ‘CIP’ terminal. You may drive up to the terminal and enjoy valet parking. You can leave your car parked at the terminal for as long as you will be away. It is perhaps the only place in the world that you will return to a freshly washed and cleaned car. The staff handles your baggage check in and boarding requirements on your behalf as soon as you arrive, allowing you to kick back and relax or explore the many amenities from an art gallery to shopping, a state of the art business centre and a lounge featuring WIFI internet access, computers, and plasma televisions. 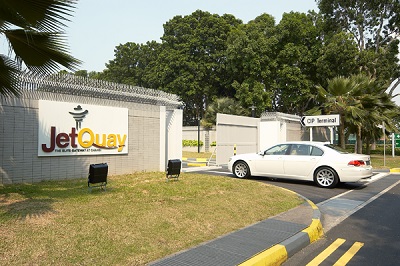 "JetQuay is not another airport lounge. It is a unique concept that rolls an airport terminal, premium lounge and boutique hotel all into one building. While it's called a CIP Terminal, for Commercially Important Persons, the moniker doesn't really do it justice" remarked Barry D. Nassberg, Executive Vice President and Chief Operating Officer for Worldwide Flight Services, the leading airport services company and main shareholder in JetQuay. "It's open to all who value time, service and privacy. We serve all passengers flying on any airline in any class, including those using the budget airlines".

JetQuay’s commodity is time made possible by a concierge like service. High flying executives arrive an hour or two before their flights leave, because they can work and meet with their local teams in the terminal’s boardroom right up until just before they board the aircraft.

“People don’t associate the value of an airline ticket with the value of the extra time they have to seal that million dollar deal before they leave the country. Our customers use the terminal because it expands the time they control. Our value lies with the fact that our travelers are freed from the issues of travel and can just focus on investing their time in what matters most to them, whether business or pleasure.” comments Vincent Metais, Vice President – Commercial - Asia Pacific for Worldwide Flight Services. 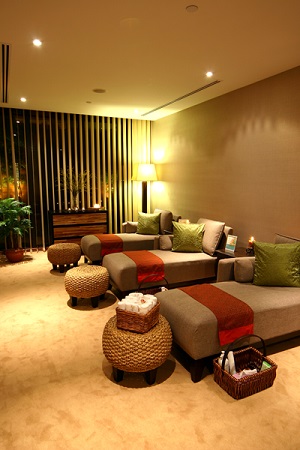 Those who wish to be spoiled or pampered may indulge in spa treatments. Celebrities may host their media conference or greet fans at the terminal, and equally those who are publicity shy and crave privacy enjoy being out of the limelight in their private meeting rooms. Regular passengers enjoy the terminal facilities before catching their budget flight to their holiday destination. Typically harassed passengers are completely relaxed, by passing the main airport on arrival and being transported by electric buggy away from the crowds to a five star hotel environment to relax, have breakfast, and catch up on email or a workout at the gym. They grab a shower before heading into town for a day of meetings. It doesn’t matter to them that their hotel room can’t be checked into until noon because they have already accomplished what they needed the room for.

Some five star hotels are utilising JetQuay’s Gateway and Quayside meet and greet services as much as twenty times in a day to represent their brand and delight guests who are not expecting such a superior service from the hotel. A staff member greets the hotel’s guest at the air-bridge using a name board branded with the hotel’s logo. They then transport them to the CIP terminal via electric buggy, where they clear immigration and customs immediately while staff collects their baggage. The passenger experiences the hotel’s level of service from the moment they land in Singapore until the time that they leave.

Airlines and corporations such as private banks also outsource to JetQuay premium services for their or elite clients. Also available: dedicated meeting rooms designed in the corporate livery of those sponsoring the room so that their visitors don’t have the hassle to going into town and day visits to do business in Singapore are feasible. In fact, the visitor can remain in transit within the terminal without clearing immigration and still meet face to face with local partners. 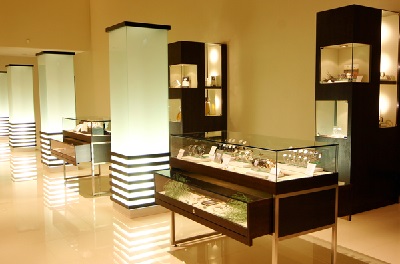 Subtle advertising and well placed products such as art and jewelry are intermittently placed in the common areas in the terminal. Eight pieces of art have been sold thus far through the terminal since its opening in September 2006. Advertising in the terminal is targeted to a captive audience. Because of its uniqueness, event planners are hiring the CIP terminal as a venue to do up-market product launches.

Like all new businesses, JetQuay has had its teething problems with its start up operations. With operations now humming along nicely, the company is now fine tuning the attention to detail such as a new brand of coffee and espresso machine through to fresh food sources. Despite all of the publicity from its opening, consumers are only just beginning to catch on that there is a new way of travelling, one in which you can enjoy the whole experience, not just the destination, but it hasn’t escaped the eyes of savvy planners eyeing the next new thing for their airport. You, however, don’t have to wait as JetQuay will delight you on your next trip into or out of Singapore.

﻿
Terms & Conditions
Conditions of Use of Online Booking Facility

Conditions of Use of Online Booking Facility

2. USE OF THE JETQUAY.COM.SG ONLINE BOOKING FACILITY

2.1 Jetquay.com.sg Online booking facility is solely to assist you in determining the availability of services and to make reservations.

2.2 Other terms and conditions will apply to your reservation. You will abide by the applicable terms or conditions, including payment of services when due and compliance with all rules and restrictions regarding availability of services. You are solely responsible for all charges and taxes arising out of the use of the booking facility.

3.1 You must book a minimum of 24 hours in advance of your trip to receive confirmation.

3.2 Credit card details are required to secure the booking.

3.3 If you group consists of 10 guests or more, please contact our sales team for confirmation and pricing at sales@jetquay.com.sg or by calling +65 6262 2220.

3.4 Bookings for services within 24 hours may be possible, please contact our reception team at reservations@jetquay.com.sg or by calling +65 6543 4248 and we will confirm whether we can accommodate your request.

3.5 Payment will be made on the date of travel.

3.6 All cancellations or no show notice must be made at least 6 hours prior to travel time or you may be charged in full.

3.7 JQ reserves the right to amend the terms and conditions without notice.

3.8 Significant changes to airline schedule or flight arrival & departure times may result in JQ being unable to complete the confirmed service. In such cases, JQ may be unable to provide the service booked

4. NO UNLAWFUL OR PROHIBITED USE

4.1 You will not use this Web Site for any unlawful or prohibited purposes.

4.2 If JQ (in its sole discretion) believes that you are in breach, or will be in breach, of any of these Conditions of Use, JQ reserves its right to cancel your booking without giving you a reason and/or without further reference to you.

JQ is not liable for any injury, loss, claim, damage, including those based in negligence, whether actual, incidental, special, exemplary, punitive or consequential (including lost profits or other special damages) which arises out of or is in any way connected with any of the following items:

7. CONDITIONS OF USE OF WEB SITE

This website is owned by Jet Quay Pte Ltd (JQ). By using this Web Site, you indicate your agreement to be bound by these Conditions of Use.